Last time, I wrote at great length about the behind-the-scenes work that goes into bringing a multi-building project to fruition.  Now that we’re officially after the fact, I can speak a bit to what exactly that project was.

Late last school year, Marc Uys, Executive Director of the Princeton Symphony Orchestra, reached out to one of the elementary music teachers in our district, Dan Beal, to gauge his interest in participating in a project with the German group Signum Quartet.  The SQ was experimenting with something they were calling “quartweets” – short arrangements for string quartet of no more than 140 notes (to parallel a tweet’s 140-character limit) – and they were soliciting quartweet submissions from their fans via social media.  PSO and SQ asked Dan if they could partner with our district to workshop and perform quartweets written by students.  SQ would work with violist/educator Jessica Meyer to flesh out the students’ original compositions, which would be recorded by the quartet and published via social media, and also performed twice: once at a concert for district students, and again at a free evening concert for our community.

Dan brought the idea to me and explained the parameters: the Signum Quartet would only be here in the States for a limited period of time at the end of September, so if we were going to do it, there was no room for discussion about the time frame.  Keep in mind it was after Memorial Day when we first started discussing this, so between then and the end of the school year (about three weeks hence – you know, when nothing else is happening) we had to:

After school let out, all we could do was wait until September and hope the students didn’t lose interest in the project over the summer.

Not only did the students not lose interest, they all completed their works and submitted them to their teachers.  On September 29, Jessica Meyer and the Signum Quartet conducted two workshops with our seven student composers to flesh out their pieces and bring them to life. 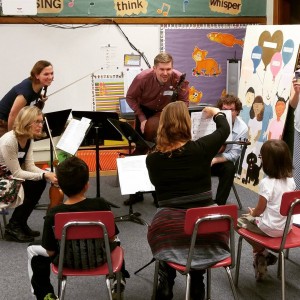 It was such a pleasure to watch Ms. Meyer work with our students.  While she is clearly a very accomplished musician, she is also a teacher who has a knack for helping students determine how their composition tells a story.  That, combined with SQ’s willingness to play a piece a million different ways until the composer found the right one, made for an incredible learning experience.

The following day, we bussed all 300+ third graders from four buildings to our middle school, where they listened to the world premieres of seven local, home-grown quartweets by our Lawrence Township composers, as well as other quartweet-ish short pieces by lesser-known musicians (some hacks called Bach and Beethoven).  The culminating experience was the free community concert, held the evening of October 1 at our high school, at which the SQ once again played all seven of the student quartweets as well as other, similarly short classical pieces.  The students even got to sit onstage with the SQ and speak a bit to the inspiration behind their pieces. 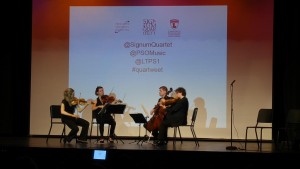 The experience is now over, but I have to believe that the memories will truly last a lifetime for the young people involved in this project.  I’m very proud of the student composers and grateful to the long list of people involved in bringing this idea to fruition.

You can read local news coverage of the event here (with commentary from Dan Beal and Marc Uys), read about Signum Quartet’s Quartweet project here (with directions for writing and sharing your own!), and don’t forget to check out the hashtag #quartweet on Twitter to hear examples of 140-note pieces from composers young and old around the world!

Be the first to leave a comment. Don’t be shy.