Last week saw my second of two Edcamp/unconference events in as many months: first was Edcamp Leadership at the end of July, then came WilmU LeaderCamp on August 11.  WULC was hosted by the university at which I am a doctoral student, Wilmington University, and organized by four doctoral students: Chrissi Miles, Todd Hackett-Slimm (both also on the ECL team), Bill Marble, and my good self.

Organizing this experience for graduate (doctoral/Masters) students, alumni, and faculty presented some unique challenges.  Unlike the Edcamp model, which has spread by word of mouth across social networks over the last two years, this was a fairly new format to most of our attendees.  Although I had hyped up the event for weeks to my doctoral cohort’s Facebook group, they only represented 1/3 to 1/2 of the attendees (strong showing, Cohort 21!!).  That’s still quite a few folks who came not really knowing much about the unconference framework.

I’d be lying if I didn’t admit to being quite nervous when, half an hour after people started arriving, there was only one session posted on the session board (mine!).  I knew that the organizers and maybe one or two attendees could be counted on to run sessions, but what about the rest?  We initially had four rooms and four time periods, so 16 possible slots for sessions – we (the organizers) couldn’t fill those by ourselves.

Fortunately, people started to gravitate toward the session board after we made an announcement, and soon people were debating what topics they wanted to discuss and signing up for sessions.  We had so many folks want to facilitate conversations that we ended up adding two more rooms to create 24 topic opportunities – by the end, only one slot was left unfilled! 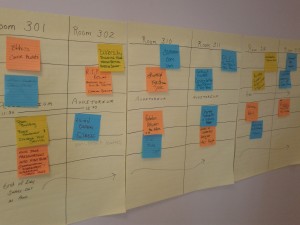 There were so many sessions I wanted to attend, but with only so many sessions and hours in a day, I had to be very selective.  My day started off with a discussion of achievement gaps in all forms with Lanette, Robert, and Dr. Whitlock.  While we were a small group, it was probably one of the deepest and most powerful discussions I had all day.  From there, I ran a session on managing digital identity.  At lunch (which was graciously provided by the university, as was breakfast), Dr. Mike brought us all up to speed on some current events in the Ed.D. program, including its recent FULL accreditation by NCATE!  After raffling off some WilmU swag, I headed off to a session by Reshid on Digital PLCs using Yahoo Groups, and then did a rerun of my Edcamp Leadership session on flipping the faculty meeting, which took on a slightly different form in discussing with folks both involved and not involved in K-12 schools.

It was a whirlwind day, and 24 hours later I’m still reeling a bit from it all.  That said, here are my primary takeaways from the day:

It was an exhilarating day of learning, and I think (hope?) we laid the groundwork for an event that will continue in the coming years, even after Bill, Todd, Chrissi, and I have all graduated.