So a funny thing happened on the way to my inbox…

I received an email early last month through the “Contact” page on my website with the subject line, “Do you know a child named Kiera who would use a winter hat?”

This caught my attention because, as luck would have it, I do indeed have a daughter named Kiera, and who can’t use a winter hat in February?

Not sure what this was all about, I read on.  I’m glad I did, because it turns out it was an email from Dr. Linda Quirke, a sociology professor at Wilfrid Laurier University in Ontario, Canada.  Turns out a friend of Dr. Quirke’s made personalized wool beanies as party favors for a four-year-old’s birthday party, but misspelled one of the partygoer’s names as K-I-E-R-A, and therefore couldn’t use it.  Hating to see a perfectly good hat go to waste, Dr. Quirke took to Twitter to search “daughter Kiera”, to see if anybody had a child who spelled her name that way.

She found a tweet to me from my Twitter friend Diane Cordell (presumably this recent retweet of me announcing Kiera’s birth five years ago?), went to my Twitter profile, where she found a link to my website, and then the “Contact” page, from whence she sent me her message.

Never one to turn down free hat offers from the Internet, I e-mailed Linda my address and sure enough, about a week later: 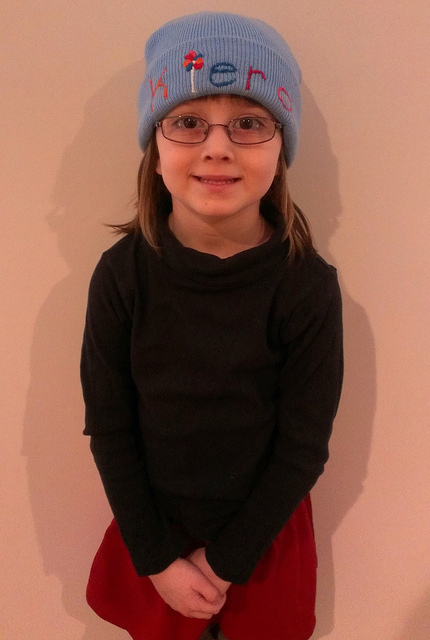 Nearly six years after becoming active on Twitter and Facebook, the ability of these services to create connections between people still amazes me.  That we are so eminently searchable online these days (some of us more than others, granted) is something I am convinced we need to embed in our teaching and learning.  Some schools approach it from the standpoint of “be careful what you say/do online”, but beyond that, think of the relationships – personal and professional – that can arise through social media.

In Deschooling Society, Ivan Illich proposes – among other things – that we raze the current educational system and learn through apprenticeship instead, identifying our areas of need, seeking out masters of their trade, and learning at their feet.  The logistics underlying that idea are not as far-fetched as they may have once seemed.  The network already exists; it’s here.  Will we teach our students to use it to make connections with other smart people, regardless of geographic location, and learn from and share ideas with them?  Will we teach students not only to take from these resources, but also to contribute their own learning to the mix so that others may learn from them?  Or will we simply use it to keep up with what celebrities and athletes are eating for lunch?

I know it’s a stretch to go from this cute hat story to Ivan Illich, but I think the bigger point is that anyone who has a Facebook page or a Twitter account – whether they like it or not – is a node in a network, and it does students a disservice to not: a) make them aware of this, b) illustrate that for them, and c) help them realize how to harness and contribute to the power of that human network.  That will go a long way toward creating the “21st century” and “lifelong” learners that we are so fond of referencing in the edu-jargon.

Johanna and Linda, thank you so much for reminding me of this, as well as for Kiera’s hat.  She loves it, and I love how she got it.

And Now For Something Completely Different